What is likely vs. what is possible, and why that distinction is imperative right now.

The other day, I posted a question on Facebook. I asked only people with professional or academic experience in law, political science, and government to answer. My question was, paraphrased: If Russia did indeed coordinate with the Trump campaign to swing the election against Clinton, and we recognize that Trump’s presidency is illegitimate, what would be a creative legal approach not disallowed by the Constitution to remove him from power?

I had to delete the post because, surprise surprise, people without the requested expertise used the thread to vent their anger instead of answer my question. But expert or no, the answers fell into two categories: those who saw what was possible versus those who could only see what was likely. Those who answered didn’t frame it that way, of course, but the very fact that a few experts did propose possibilities—that possibilities existed at all—exposed the fault line. One friend cited a 1994 case in Pennsylvania where a judge declared an entire Senate vote fraudulent, and ordered the losing Republican candidate to take the seat. Another wrote (and I’ve posted with her permission): 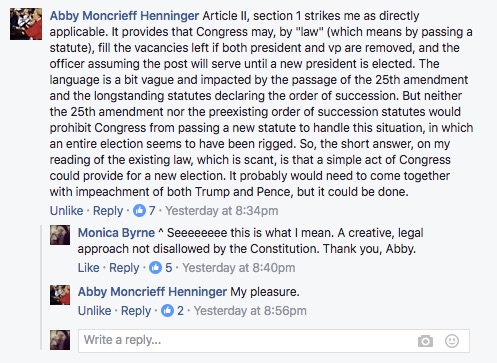 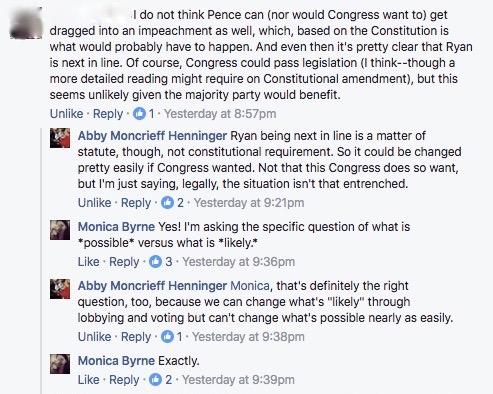 The fact that these are thin threads of hope are beside the point. The point is that they exist at all, and Abby—aka Abigail R. Moncrieff, JD, University of Chicago Law School, expert on healthcare and constitutional law—pointed to them. And that she didn’t answer “sorry, girly, not gonna happen” or any of the thousand variations on it that I’ve kept hearing ever since Election Day.

I felt the same profound frustration in the run-up to the Electoral College vote. Here was a legal Constitutional way to stop this presidency. Not only that, it was literally designed to stop a presidency like this. But at the levels where it would have mattered—politicians, celebrities, lobbyists, influencers—the will to convince those electors was completely absent. I still don’t understand why. Was everyone just still in shock? Or resigned to what was “likely”? (The fact that the “those in power” demographic and the “white cis men without much to lose under any presidency” demographic largely overlap is no coincidence.)

If you give a shit—and first, be honest with yourself about whether you actually do, because if I’ve learned anything since the election, it’s that there’s so much more blissful resignation in the face of encroaching fascism than I ever could have imagined—if you really do give a shit about this country and the welfare of its people, you must start thinking in terms of what’s possible. Start thinking creatively. See ways forward that others don’t. See harder. Try harder. I have no doubt that the ways out of this dark valley exist, if only we have the will to find them.

I wish I were a legal scholar. I wish I had more power. But for now, I’m a science fiction writer with a humble following, so I’ll do as much as I can where I am.

If you liked this post, please consider supporting my work on Patreon for as little as $1/month. My work is entirely funded by patrons like you. Thank you.

4 Comments on “What is likely vs. what is possible, and why that distinction is imperative right now.”