Island of the dog. 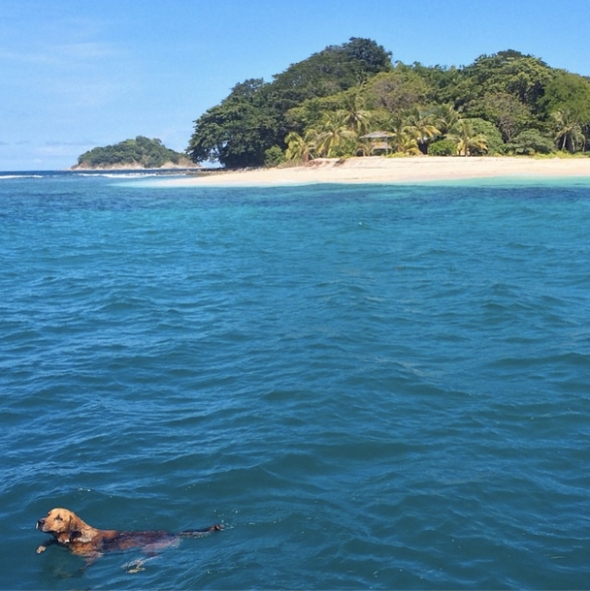 We were still a half-mile away from the island when our expedition leader shouted, “There he is!”

We all strained to look where he was pointing. There was nothing but blue waves. But then I saw something bobbing in the water, and we all agreed it was a buoy, because what else could it be, this far out? But then we saw the buoy was bobbing toward us. And then it resolved into the head of a golden-haired dog.

Many years ago, an Austrian professor named Alfred Hofer bought an island in the Philippines and built a beautiful retreat there. Then he got in a motorcycle accident. He hasn’t been back since. Tao Philippines and its crews started taking care of the dog, making a point to stop by on its island-hopping tours to feed him. They’re the only ones keeping him alive now.

The dog paddled in circles around our catamaran until the crew had filled a basin with our leftovers from lunch, which, once onboard, he inhaled. Then he swam with us back to the island, and then romped onto the beach as if to show us around. The house was locked. Through the windows, I could see zoology textbooks gathering dust on the shelves. I flipped a light switch, and red ants poured out of the box.

We took a trail up the side of the island, past a white cross and altar, up to a small house built on a banyan tree. The doors were made of glass and faced in every direction. Past the verandah was a drop to boulders and crashing waves. I imagined it must have been the professor’s study, and that I could move in and write there, and my bed would be in one corner, and my coffeemaker here, and my desk there, and a bed for the dog right next to it.

He knew when we were leaving. I didn’t want to, but there was nothing we could do. His ears drooped and his shoulders caved in. I sat down on the sand with him to say goodbye and told him that if we ever crossed paths again, he would have to let me know.

But maybe we had said just the same thing in a previous life. And now, here we were.

4 Comments on “Island of the dog.”