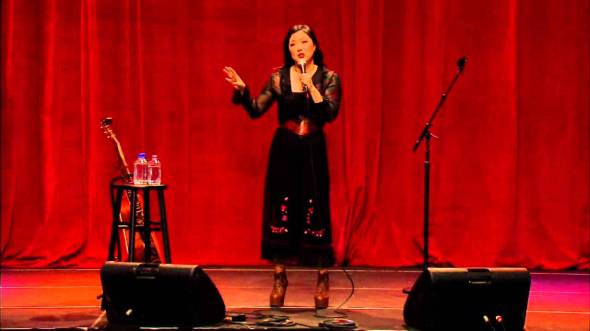 Margaret Cho came to perform at my alma mater, Wellesley, when I was a senior. She was incredible. It was one of the times in my life I laughed so hard I couldn’t breathe. She talked about her mother, whom she impersonated onstage, with a thick Korean accent. It’s a bit she uses often (see here for an example).

Afterwards, during a Q&A session, a student—also East Asian, if I remember correctly—challenged her about using an accent for comic effect.

Margaret said, “But this is what my mother sounds like. I’m not impersonating her. She takes over me; I actually leave the room.”

The student said, “But you’re still deliberately making a choice to channel her for comic effect.”

Margaret said, “But you’re the ones laughing.”

…Neither gave ground. It was a painful exchange, but one that keeps coming back to me as I write Tarantino. I’m white, my ancestors lived in the US for at least three generations back, and I speak with a Standard American accent, and so I benefit from all the privileges that those positions incur. But the play I’m writing is a satire featuring thirteen Olympians from countries all over the world. When we held auditions, we told everyone to go for broke, including in accents. It was fucking hilarious. But I have really mixed feelings about that. How do I write text that I know will be spoken in an accent, knowing it’ll likely have a comic effect?

The only useful “rule” I can think of, going forward, is to make my actors co-creators in their characters. I feel like this is necessary whenever a playwright is writing outside of her experience, especially when that realm of experience is demarcated by privilege. But if any fellow theatre artists have dealt with this issue, and artists of color in particular, I’d love to hear from you. Thank you.