← Members of my jati.
Blessed are the prepared. →

The wrong end of a telescope.

(This essay was originally composed for the New York production. It missed a deadline. So I’m posting it for the Berkeley production, which I get to see tonight.)

I was badly bullied in grade school. I was loud, smart, big-breasted, and feminist in a small conservative Catholic community, which meant I was the target of daily misogynistic verbal abuse, and some physical abuse as well. I remember once I was surrounded by a group of boys after class who tried to tear my golden baby backpack—very chic in 1993, and my pride and joy—off my body, until a female friend rescued me.

My older siblings all assured me that what made me a target in grade school would make me interesting and well-liked in college. But that was small comfort when I had seven years to go.

My friends Allison and Kristen were also the targets of bullying. We traded notes, written in pastel ink and intricately folded. Then one day I got a note from Allison written not as if she were in religion class, but as if she were on the beach in Hawaii. I especially remember the line “Pah-pah-pah—PATOOIE! I just choked on a mango seed.” Not that either of us had ever eaten a mango or (clearly) knew what a mango seed looked like. But when I read that, I felt a chill. I wanted to eat a mango. I wanted to know how she’d gotten to the beach.

Over the next year, we wrote each other from all over the world, each time ending with “So tell me, darling, where do you find yourself now?” The fantasy snowballed: we had celebrity boyfriends (Joey Lawrence, Wil Wheaton) and genius children and an underground brotherhood called the Coatroom Natives who aided us as architects or warriors wherever we went. But we also used these letters to take revenge on those who bullied us in real life. First we merely observed their horrible deaths; then, we started killing them ourselves in long, torturous, inventive ways that incorporated whatever we’d learned in school that day. John got trampled to death by an elephant in Morocco. Matthew drowned off the coast of Normandy and was eaten by origami shrimp. Thomas was roasted on a spit in the Alaskan wilderness.

This was before the massacre at Columbine. I don’t know what adults would have thought if they’d intercepted our letters. But to us, they were an outlet: they allowed us to imagine a world where our will became deed, where we were powerful and desired, free to travel and love as we chose. All of which was a far, far cry from the reality of our daily lives.

These letters were my inspiration for What Every Girl Should Know. Four young girls in a 1914 Catholic reformatory discover Margaret Sanger, the feminist activist and (eventual) founder of Planned Parenthood, and start reading of her adventures abroad in the newspaper. Soon they’re imagining their own adventures, complete with revenge fantasies on bullies of a darker sort. In 1914, as now, when poor young women don’t have information about their bodies, they’re far more susceptible to abuse. And because their abusers are also their caretakers, they’ve resigned themselves to its inevitability. But through their fantasy letters, they begin to awaken to what true freedom looks like and the full extent of the violence that’s been done to them. They then have a choice about how to continue to live.

What imagination accomplishes in these girls’ lives is what theatre accomplishes for a society: it’s a sacred laboratory where we test the human condition. And out of which real change is possible. Take my friends and me: our dreaming wasn’t idle. Twenty years later, abnormally among our peers, we’re all seasoned and mischievous world travelers—Kristen is an actor, Allison is a women’s rights advocate, and I’m a writer and playwright. Where do we find ourselves now? Happy, free, living lives of our choosing. When I regard my time as a bullied adolescent, it’s as if I’m looking through the wrong end of a telescope at a landscape far, far away.

I don’t know if our society can say the same. In 2013, we seem to be fighting the same battles Margaret Sanger was fighting in 1913. Access to birth control and women’s health services are both severely under attack. When I wrote What Every Girl Should Know in 2011, I had no idea that the play would be so topical. But apparently we need to reminded what the world is like for young women who don’t have sovereignty over their bodies—which is still the reality for millions of young women all over the world, and if fundamentalist lawmakers have their way, could be the reality for millions more. 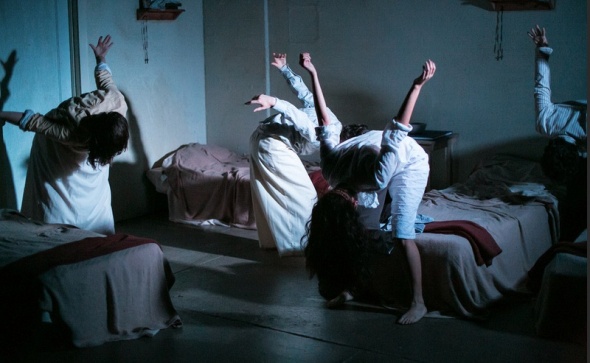 2 Comments on “The wrong end of a telescope.”