← The hero with a brown face.
Extremely big news. → 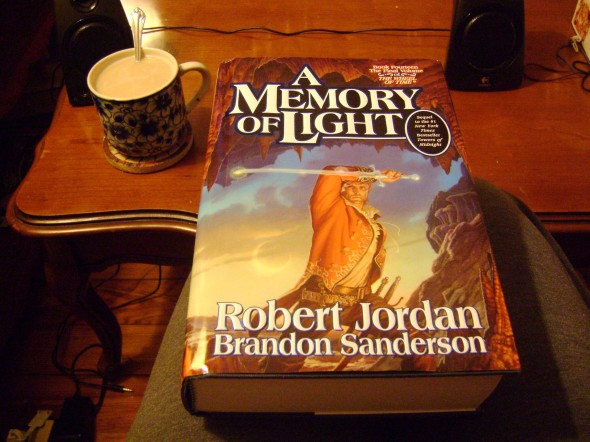 I’ve been reading this fantasy series for sixteen years. This is the fourteenth, and last, volume.

When I was a teenager, I cast each character with movie stars I saw at The Allen and supermodels I saw in Vogue. Mat Cauthon was 1996-era Leonardo DiCaprio, Moiraine Sedai was 1996-era Helene Christensen, and so on. I had a list of hundreds of them. The boys who were my friends/bullies in high school knew that the one surefire way to get under my skin was to grab the book out of my hands, turn to the last page and start reading aloud.

Then I graduated from high school, graduated from college, graduated from grad school, and moved to North Carolina to write. But reading Wheel of Time books was still a sacred ritual. Every time a new one came out, I bought the hardcover and got out The Traditional Bookmark, an accretion of relics collected over sixteen years, and peeled it apart to rediscover each one. And then I put on one particular album of Scottish folk music (Tannas’s Ru-Ra), which I listened to at no other time. If I’d encountered this series now, at age 31, I probably wouldn’t have picked it up. But they got me young. And so I crack open the brick and fall into the world of Aes Sedai and Aiel and all the friends I saw leave their home village in the first book, and are now leading their world’s battle against darkness.

I’m going as slowly as I can, because when I finish this one, it’ll be over.