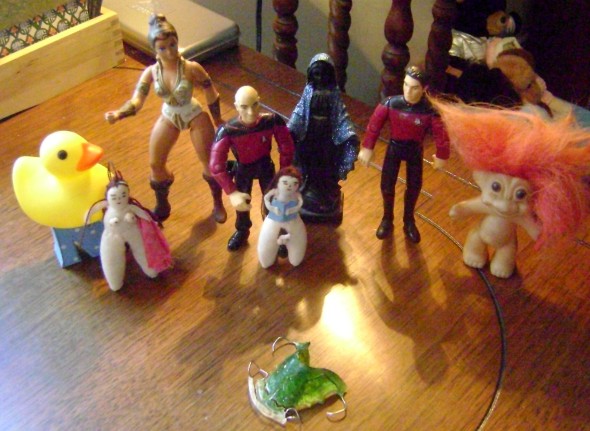 The play I’m writing now, THE PENTAEON, has a cast of ten characters. Most of them are onstage most of the time. I didn’t quite appreciate how hard that would be. To help me, I roamed the house looking for action figures or, in any case, little objects that could stand in for each character so that I could keep track of them in each scene. From left to right, we have:

(4) Sheila from the He-Man universe—my most ancient action figure,

(7) My Virgin Mary carved out of lava from Mount Vesuvius,

(9) A Troll, which was a gift my father got me when I was ten, after I’d broken into his cabinet to find the hidden stash of Valentine’s Day candy, but the cabinet was an antique and stayed broken, and Dad was angry, and I felt so bad I went and hid under my bed because I felt I wasn’t good enough to lie on my actual bed, and then called Abby the dog in and tied a note around her neck that told Dad how sorry I was, and told her to “go see Daddy,” which she did, because she was an awesome dog, and ten minutes later she returned with another note tied to her neck, that said that Dad loved me and that saying you’re sorry was a sign of strength, not weakness, and was signed, ‘Your friend, Dad’; and when I got my Valentine’s Day candy that year, this Troll was in the basket, holding a sign that said Friends Are Forever, and

5 Comments on “The usual suspects.”