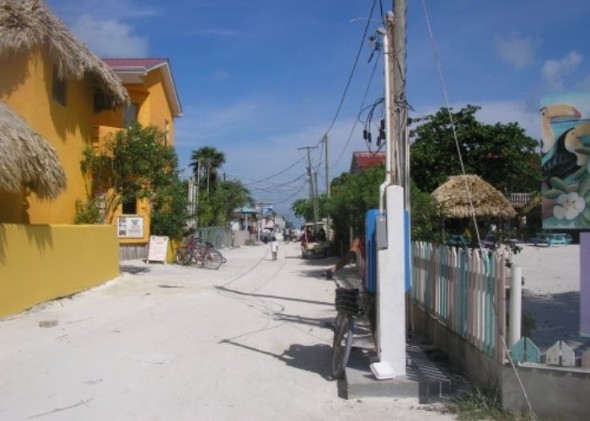 [Note: this post should not be taken as definitive on whether to travel to Belize. In fact, I think the incident upset me specifically because I’d had such an easy time in the rest of Belize. The vast majority of men I’ve interacted with have been kind, friendly and polite.]

Two nights ago, I was walking along the main drag of Caye Caulker, looking for a place to have dinner. I registered catcalls originating from a group of men across the street. They’d been doing it every time I walked through. As before, I ignored it. But the calls continued.

I get furious when people (men and women) tell me to “just let it go.” I’ll decide if and when to let it go. Sometimes I do, to protect my mental health, because I generally prefer being happy to being angry. I don’t take every instance of harassment as an implied referendum on my basic humanity.

But…sometimes I do. And this time, for whatever reason, I snapped.

I took a hard right and made a beeline for them. I pressed my hands together and said, fighting to keep the sarcasm out of my voice and failing spectacularly: Sirs, if I do not respond to you the first time, it stands to reason that I will not respond to you the second or third or fourth time. Further, it stands to reason that I do not want your attention, or even find it insulting and hurtful. They took the first refuge of the cowardly, saying What? What? as if they suddenly didn’t understand English. (In some ways, they did. How many people actually call them out?) I continued, How would you like it if I got in your face, yelling questions about your name, nationality, hotel, and what you were doing tonight? You wouldn’t. Because it’s not about sex. It’s about ownership of public and private space. It’s an exercise of power. And when I occupy your space and yell in your face, you can feel that.

I might be on edge because, the day I got to Caye Caulker, I was talking to the female proprietor of my guesthouse about a tour group in San Ignacio (Mayawalk) whose owner (Aaron Juan) fled across the border after charges of sexual assault of minors, but has returned and continues to operate. The woman’s response was, “Yes, but did they lead him on? What do these girls expect if a guy buys her drinks all night and then she lets him walk her home?”

I struggled not to explode. I cannot believe people say these things without making the most basic logical inquiry. To wit (and forgive the heternormativity; I’m speaking from that experience):

(1) Does a woman owe a man sex in exchange for alcohol? No.

(2) Is it fair for a man to expect sex in exchange for alcohol? No.

(3) Is it fair for a woman to let a man buy her alcohol, suspecting he might want sex in exchange? ……..eh. If I’m ever in that situation, I just shrug and say, It’s your money. If I get some free drinks out of patriarchal bullshit tonight, it’s no skin off my back.

(4) Is that misalignment of expectations punishable—and only on the woman’s side—by rape? No. To put it mildly.

Oh, and I almost forgot!—

(5) Past a certain point of intoxication, are women capable of consent? No. (And there’s a handy term for sex under these circumstances: assault.)

Back to the pack: the men continued to play dumb. So I walked away. Whereupon they took the second refuge of the cowardly: calling me ugly names and making ugly threats that—even though I knew were empty, on this tiny island where everyone knows everyone and tourist dollars are essential—upset me.

The next morning, walking the same strip, I was approached by an older man who said he didn’t like the way those men had spoken to me, and had told them so. I thanked him. I began to explain why it had made me so angry. He gestured me off the strip so we could talk more. I said no, I had to get lunch and then go back to my dive school. He said, Let me buy you lunch. I said, Thank you for offering, but I don’t want you to buy me lunch.

Immediately his tone changed. Don’t be like that, he said. He came closer and I smelled alcohol on his breath. He reached for my arm and I slapped his hand away and said Don’t Fucking Touch Me and walked away. I could hear him chuckling behind me.

I know all men aren’t like this. I know that. And yet sometimes it’s very hard to remember.

So I sought an antidote: I went to the police station. (In some situations or countries, this might not be a good call. I judged that this time, it was.) I had a good cry and explained to the clerk what had happened. He introduced me to an officer named Kent, who’d just come off duty. I started to explain, as I had with the older man previously, why the harassment had upset me. He said I didn’t have to explain. That there was no reason I had to put up with it. I felt like someone was finally agreeing with me, saying, Yes, the sun does rise in the east.

Kent offered to walk up and down the boulevard with me. We did. He was very kind. He asked me about my writing. He advised me on how best to learn Spanish. I pointed out the men who’d been bothering me, who, seeing me with Kent, fell silent and melted away.

Kent then invited me to his family’s pizza place, where he’s the bartender and his wife is the chef. After going home and showering, I went. He greeted me. He introduced me to his wife. I ordered a personal pizza and it was so amazing, I ordered an entire second one, and ate it all. I tipped generously and Kent came around the bar and gave me a big hug, and told me to come to him if I had any more trouble.